The life of self effacing bar owner Tak is thrown into jeopardy, when estranged brother Ling, now a powerful, shady property mogul, suddenly reappears demanding retribution and revenge for the death of  Mia, the woman both loved, 20 years ago in Hong-Kong. But when Ling also threatens those Tak loves now, he realizes there is just one way to protect them, and get rid of Ling. Tak must betray Ling for a dark crime from the past, but to succeed, he must steal the proof from right under his brother’s nose.

An unresolved past always haunts. Jade Warriors starts its story in 1970’s Kunming, erupts in Hong Kong in 1999’s, and collides for the final show down in 2021. It has a heightened, almost fantasy feel all its own. A glamour-infused, neo-noir rollercoaster, Jade Warriors pays homage to the romantic, revenge thrillers of the 1980’s, and to the hard-noir tone of 1940’s thrillers. However, mostly split between present day Soho and the wilds of  Scotland, Jade Warriors will resonate with many. For who, like Tak, hasn’t had a broken heart, and who doesn’t hide regrets they’re desperate to keep buried?

Peter Russell, script consultant, (www.howmovieswork.com )said: ‘this is a fast moving, sexy, romantic action thriller – I believe it has a bright future’. 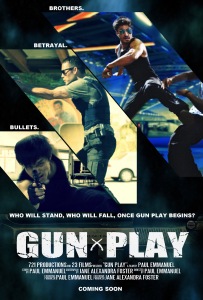 When reformed crook David is inexplicably gunned down, and his three estranged sons attacked, they’re forced to overcome years of enmity to uncover why, to avenge their father, or join him.

A break neck speed action thriller, set over 18 hours. David, (50’s), once king of a crime empire, slowly turned legit. He hopes to make up with his first born, US Marine, JACK, (27) who acrimoniously moved to the United States at 15, to live with his American mother’s family. Jack left behind Chinese half- brother, KAI, (26), now a martial arts expert, but the pair have hated each other, since Kai came to live with his Father when both boys were 4. Asian RAJ, at 25, is the youngest, whom David adopted when he was 4, after his parents were tragically killed in an accident, which also left Raj unable to speak. Not that it stops him. Raj is strong and silent, and also martial arts master, and is also accomplished, as is Kai and American step mum DAISY, in the visual language of signing. Raj is most loyal to Lee, but he cannot help but wish they could resolve things with Jack, so when the three are forced together to find out who attacked their Father, and who is now determined to kill all the Stanton family, it’s Raj who tries to keep the peace.

But as plot spirals tighter, the three brothers must race against time to find out who’s behind it and why. Finally forced back to the Gym they’ve trained at all their lives, they take a stand against overwhelming odds from a quarter none of them ever expected.

Strong action based around gun play and Martial arts, and the themes of redemption, revenge, retribution and family loyalty run throughout, ‘Gun Play’, which pays homage to Hong Kong director, John Woo’s classic films, ‘ Hard Boiled, ( 1992) & The Killer, (1989) ’. However the the minimalist, lean story line, has the speed to rival taut action thrillers like, ‘The Raid’, (2011). But with a fierce heartbeat about a 21st century, multi-cultural family, set against a back drop of crime, and a twist towards ‘car play’ as well, ‘Gun Play’ also has the elements that made the ‘Fast and Furious’ franchise so successful. With strong, conflicted, layered characters, Gun Play could easily spin off into prequels and sequels, and is a thriller which all those who love to live fast and live hard, will find impossible to ignore.

STATUS: Good first draft. For more information and an info pack/script, contact me.

Error: Twitter did not respond. Please wait a few minutes and refresh this page.